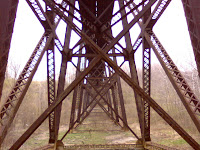 His chat turned to complaint.  Finally, the poor kid who wore sneakers to the Cincinnati Off Road Alliance (CORA) trail building day Saturday at Devou Park said he had to rest.  In a pair of big hikers I plodded on, initially to deliver empty buckets to the U-Give Cincinnati volunteers picking up garbage.  I soon realized I had passed the last trail group around section nine.  “Well, might as well see where this trail tops out,” I thought.  I put my bucket down to pick up on the way back and kept up a stiff pace.  A half hour and sections 10 through 19 passed quickly. 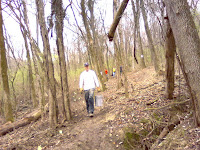 From the trail head at the ball fields at the bottom of Sleepy Hollow Road, It was an hour round trip to the vista.  My hike of what will become the first mountain bike trails in Covington, KY’s Devou Park made me think more of Bent Creek in Asheville, NC or Brown County in Nashville, IN than local trails like Tower Park, Harbin Park or Mitchell Memorial. The trail is located on the west side of Sleepy Hollow Road.  While the amount of available land in Devou won’t match that of Bent Creek or Brown County, the topography certainly does.  I lost count of the switchbacks that crisscross the beginning of the climb.  Unlike most area trails, the switchbacks at Devou don’t end at the top.  That made me smile.  About 2/3’s up the first hill, the trail wraps around the south side and into a pretty valley with flowering 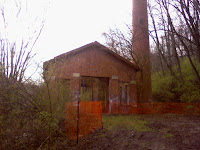 trees.  Eventually there will be some Bent Creek-esque deep bench cuts in this steep valley.  After crossing a bridge-worthy creek which dropped nearly 6-7 feet from the trail markers above, a handful of switchbacks take you to the first real vista of the west side Cincinnati skyline.  Looking at my watch, then at the green trail flags wrapping around the bend, I shook my head in disbelief.  Just like the kid in sneakers, I had to turn back. 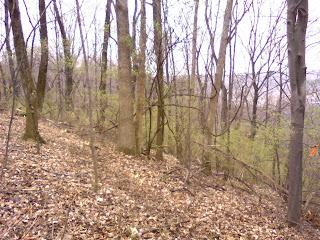 This is going to be big.  Cincinnati is about to have its first trail system with a sustained mountain bike climb that will top out at what?  Nearly a mile and a half I guess.  I’m a strong hiker.  It took me a half hour to reach the top on foot.  On a bike, I’d hedge a guess that expert riders will be looking at a 12-15 minute climb and novices may be knocking on that half hour door.  There’s nothing within 20 miles of Cincinnati with a climb of more than a few minutes.  This is just to get to the top.  The trail keeps going around the 2nd hill and on and on.  This is just the warm-up.  There’s enough land here for 15-18 miles of trail.  There are plenty of trail days ahead, plenty of time to learn that a Pulaski is a tool and Pulaski is a historic Chicago figure.  We’ll see you at the next Devou Park trail day. 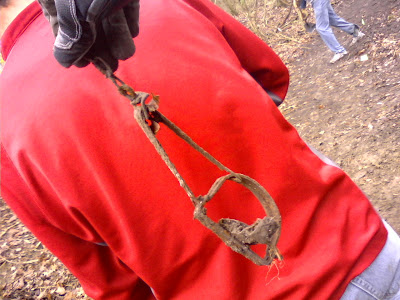 While picking up trash, debris and relics along the path of the new trail at Devou Park, I came across this unusual apparatus.  At first I thought it might be a spur of sorts for horseback riding, but upon further inspection it appears to be some sort of tool that would hang from a chain or maybe some sort of candle sconce.  Any ideas?  Leave a comment below. 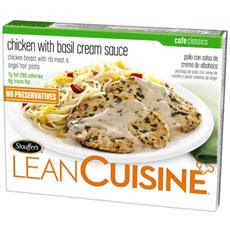 Are you kidding me?  For chicken with angel hair in basil cream sauce?  Load up the cart honey!  They’re ten for ten!  “Ooh you always eat so healthy,” my coworkers gush as I heat up my Lean Cuisine with a yogurt, and diet soda visible in my lunch box.  It smells so good.  What a sensible meal, they think.  They and I are horribly wrong.  The box may say 290 calories.  The yogurt, raisins, granola bar, and fruity snack bites might bring the total of my lunch closer to 700 calories.  Still a reasonable number. What my coworkers don’t see and what are not listed on the Lean Cuisine Nutrition Facts are the calories and fat content of the Zingers and Combos that I’ll no doubt eat at 2:30pm to compensate for the caloric deficit I’ll be running mid-afternoon. 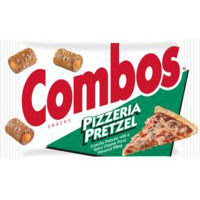 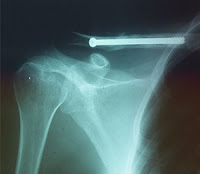 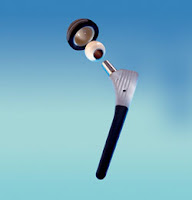 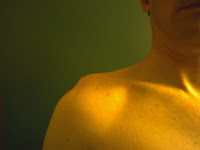 It’s a memory I repress.  I can’t quite remember when I got indoctrinated to the Freak Shoulder Fraternity.  I’m thinking in ’06, nearly three years to this day in fact.  That’s the photo of my freak shoulder there.  The photo was taken yesterday.  Still ugly, I know.  The diagnosis, a 3rd or 4th degree separation.  Surgery would’ve been for cosmetic reasons only.  So now I walk around with one arm slightly longer than the other.  No biggie.  Lance and Matt (Tyler Farrar and Stuart O'Grady too) should know it still works okay, but smarts now and then.  Although the chick appeal is gone.  My wife now gets a heebie jeebie shiver when she runs her hands across my shoulders and hits the freak bump.  It happened while pre-riding the Ohio Valley Spring Road Race Series course at Hueston Woods.  My left foot pulled out of my cheapo Ritchey pedal.  Knee hit handlebars.  Bars crossed up.  I drilled myself into the pave’ at probably close to 30mph.  It had to be the most painful injury ever.  I back that up with a torn ACL, a broken wrist, a meniscus tear and a childhood gash to the forearm from a metal file. 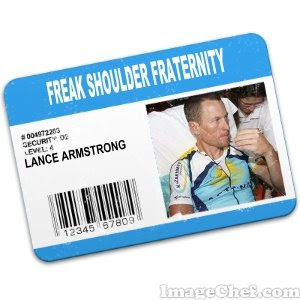 Yesterday we heard the news of Lance Armstrong breaking his collarbone in Spain and TV's Matt Lauer injuring his shoulder doing a dodge the deer dive.  Today Lance and Lauer, O'Grady and Farrar, we welcome you with our open freak arms to The Freak Shoulder Fraternity.  Enjoy the Percocet while it lasts.  Print, clip and use your ID card (below) for great discounts at physical therapy clinics across the world.  We’ll see you in six to eight weeks. 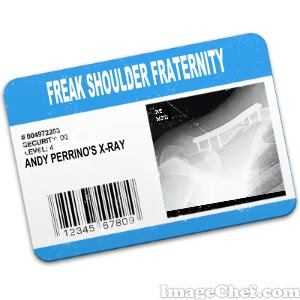 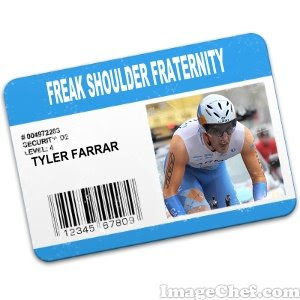 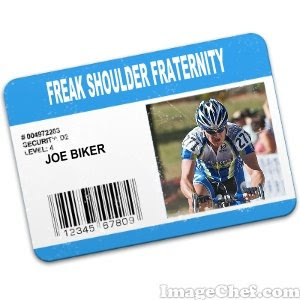 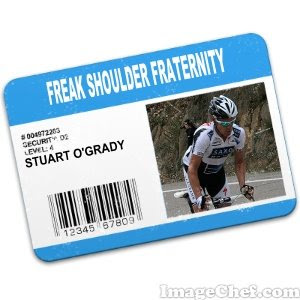 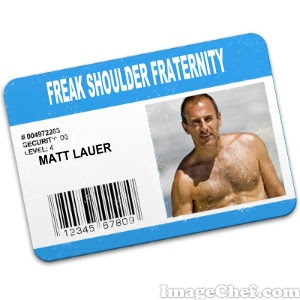 How To: Take An Austin Powers Style Natural Correcto 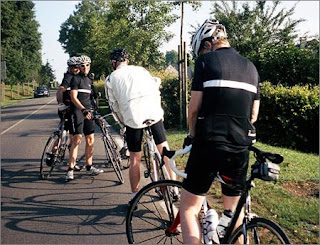 The light at Camargo & Miami in Madiera turned red.  I zipped across anyway.  I had to take a natural.  Sorry, but the laws of nature supersede traffic law.  Right officer?  I knew this ride wasn’t going to let up for the next hour and the morning coffee was percolating.  Between here and the halfway sprint, I could foresee no other points where a pause in the action and a good pee place would intersect.  Figuring I had somewhere between 30 and 45 seconds of red light before the group would get back to business, I thought I’d be able to duck behind BioWheels bike shop, take care of business and either jump right back with the group as it passed or, if this were to be a grande natural, at the very least I’d catch ‘em on the descent.  I chased the group in full-on flat-backed heart grabbing donkey wheezing mode for the next 10 miles dangling between 50 and 300 meters.  I finally caught on in Loveland, only to get popped seconds later as the group punched a big climb at 23mph. Then I spent the next 5-7 miles chasing with a teammate who also got dropped on the climb all because I had to take a pee.  Have you seen my critical mistake?

Step 1: Tell group you’re going to go, making this point right in front of the leader or veteran riders.  Maybe say something like, “Hey I’m gonna zip up here and take a pee.”

Step 2: Ask a teammate to hold up to help you bridge back on. Maybe say something like, “Can you Andy, Brian and Matt hold up a bit to help me bridge back on, thanks man.”

Step 3: Take natural as quick as possible as waiting friends or teammates dangle off the back of the group.

Step 4: Time trial to your waiting teammates or friends and work together to bridge the rest of the way

Step 5: Return the favor later by keeping a teammate out of the wind or offering up half a Clif bar.

The Best Blog Ever Mentioned on Two John's Podcast

I got dropped wearing Two John's Podcast socks on a group ride, sent a letter to complain (voice my frustration and sentiments) and yada yada yada, click play on audio player button below to hear what happened.  This is the edit version, please visit  The Two John's and download the entire podcast, subscribe on I-Tunes and check out thier cool cycling universe.  To say the least, not much sympathy coming from the Two John's.  That's cycling. 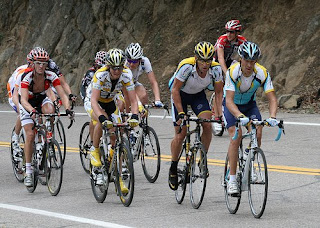 Ride my wheel like a Tandem.  Don’t take a pull.  Let me know when you’re hurtin’.  When I pull through, I’ll make room and just move over with me.  Those were the loose rules when I convinced my wife, Mrs. Biker, to skip our planned noodle and instead ride with the regular Tuesday Night Rampage racer type ride out of the Lunken Airport terminal parking lot.  She’ll be the first to confess, work has infringed a bit on her race training.  She doesn’t consider herself race fit yet, and I was asking her to come out on with a group of mostly Cat 3/4 men.  She was hesitant in the least.  I quietly feared that I totally blown the opportunity for a good sunny warm chatty evening ride with my wife and now faced an argument looming somewhere on the Ohio River horizon between Cincinnati and New Richmond.  In the backs of our heads, I think we both knew she needed a good beatdown.  Success would bring confidence, a rare commodity when you’re off the back or last up the climb.  When she saw some people she knew in the parking lot, I could see her self doubt subside.  She clipped in, rolled out, like a champ.  I was Popo.  She my team leader.  She did it, crushed it with the testosterone fueled double paceline all the way out to New Richmond, a good 25 minute section at 26mph.  Proud doesn’t quite say it.  It was sweet A+ riding on her part.  I’ll take that over a podium step any day.

Caveman And The Zipp Carbon Wheels 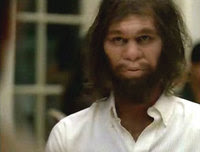 Zipp wheels free.  Caveman won at season end OVCX raffle.  Me love.  See happy cave drawing below.  Wheels still in box in garage.  Every two or three moons, when in cave, me open, pull out, marvel at like a monolith and tuck back in box.  Garage locked, alarmed, filled with ferocious dogs and army of Lycra cavemen with clubs.  Caveman protect carbon wheels to death.  However, caveman bummed.  Me can’t ride wheels without tubular tires, brake pads for carbon rims, a glue job and air.  Me grunt and pound on dirt floor.  Caveman has taxes to pay and cave to insure. 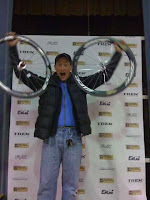 Me got air.  Air free, but bike shop say parts and labor cost near $300 with tax.  Caveman taxes due in twenty some sunrises.  Cave insurance due in nine.  Cavewoman reason taxes and insurance come before bike stuff.  Me grunt and pound floor. 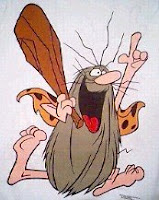