The juniors are strapped to the roof rack (with I-phones...cuz we're not cruel.)  The trailers are packed with spare cables, bikes, tents, and heaters.  Real cross season begins today as Gumbo Boy and the rest of us make tracks in the snow to Chicago, Madison, Cincinnati and Louisville.  For the next four weeks stay tuned for reports from the road to Cyclocross Nationals and the World Championships.  Like us on Facebook and follow on Twitter for periodic nuggets too small to blog about.  Juniors with smart phones make great stringer reporters.  Also, special thanks to the best sponsors ever: coach Chris Mayhew at JBV coaching, Pearl Izumi, GU Energy and Injinji Performance Toe Socks (compression garments are great).  Look for links on the main page.  As the lock goes on the trailer gate, here's the first installment from guest blogger Corey Green...aka Gumbo Boy.

I'm BACK! Time for season 4 (really?) of guest blogging on the The Best Bike Blog Ever during the true CX season - late December and early January. Once again we will be taking a week's vacation and traveling to the most luxurious places on earth to race cyclocross - Chicago, IL and Madison, WI. Its January, its below freezing and there is 18" of snow on the ground in Madison - how much more luxurious could this possibly get?
To reacquaint you with our traveling circus our two main protagnonists are Spencer Petrov and Mackenzie Green. Two kids that over the course of the previous four years have grown immensely in their ability to race cyclocross and endure physical elements - not to mention that they have each grown 8"+ over that time frame. Four years ago they were each riding 44cm Redlines - the smallest possible bike. This year they are both on 54cm bikes - imagine trying to convince your significant other that you need to buy new bikes every single year because you look like a clown riding the one you have? 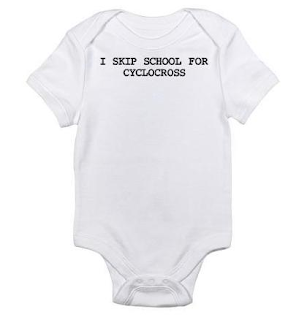 Before I go into the details of the two main characters in our plot, let's take a moment to talk about the OVCX junior population headed to Nats. There are FORTY juniors from OVCX headed to Nationals in Wisconsin - yes, that is FORTY kids taking a week of vacation from very important Albegra and English classes to race cyclocross. FORTY conversations explaining to the parents that yes, all the other kids are doing it!

Many of you know the two juniors I am traveling with, but let's take a look at each one of them a little more in depth.

Spencer Petrov is well known in these parts, along with his compatriots Gavin Haley and Ian McShane. This trio push each other week in and week out in OVCX making each of them faster - and at this point faster than many of our Elites. All three will be competing in the Juniors 15-16 race in Madison, though Spencer didn't officially turn 14 until September.

This inner competition between three kids who are great friends off the course has made each one of them faster, better, and more confident. It is like three mad scientists in their own lab trying to figure out how to get a leg up on the other one. Gavin has hopped almost every barrier this year - as a result Spencer and Ian worked hard to catch up to that skill. Without this inner competition they would each be fast, but that competitive drive makes each of them better - and has made each of them a serious contender for not just a CX Nationals Podium, but a CX National Championship.

Mackenzie Green started racing in 2009 as well, with the introduction of the Lionhearts Junior Racing program sponsored by Queen City Wheels. Her story is way different than Spencer's, but the results are no less remarkable. As a father and a coach I can relate that trying to get your daughter into one of the hardest, most physically demanding sports as their first sport isn't all butterflies and unicorns puking rainbows. You all know CX is hard and to start a sport like this with absolutely zero athletic or aerobic base is akin to deciding to speak Latin as your first language - sure you can do it, but you are going to hate yourself for a while. Mackenzie has been motivated by three other junior girls in her age group in the OVCX that are also headed to Nationals: Katherine Santos, Emily Falk, and Rachel Dobrozsi.

So...here we go again. Chicago NYR then a week in Madison, WI for the biggest show in the US for CX. This year I don't think we will get the weather gods smiling on us like last year.
Posted by Gumbo Boy at 11:53 AM No comments: