Going to Uranus? Hire a Coach

He knows bourbon.  Like the Southern Comfort on a canoe trip in my youth where I never actually paddled the boat, I will never drink it again.  While Southern Comfort made me spend a beautiful blue sky Wisconsin summer day lying in a gravel parking lot along the Crystal River, Bourbon made me shout at Sven Nys, “I’m drunk and I’m skinny!”  Then it made me spend the night laying on the bathroom tile after the Cyclocross World Championships in Louisville.  Bourbon is out of my league.  I don’t get it.

While he’s a virtual genius at select Kentucky beverages and can make anyone faster on a bike, he is not a Marvel super hero.  The guy I’m talking about is a lot like you or me, a person who is passionately involved in the things he loves, maybe a chromosome or two from being a full on savant.  While I’m into writing and music, can expound on the beauty of a worn sunburst Strat and tell you exactly why the new Fitz and the Tantrum’s song “Out of My League” sounds like the Cure’s “A Forest” from 1980, he is one of a handful of people that doesn’t get an itchy heat rash and headache trying to decipher a pro’s power meter graph posted on Velonews.  He knows bourbon and bike racing.  He’s my coach. 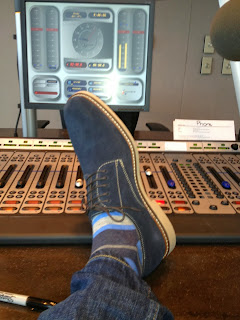 Do I need a coach?  Yes.  Yes I do.  Take these awesome blue suede pointy shoes I got from Banana Republic.  You want to touch them don’t you?  Don’t get your oily fingers on them.  Just know they feel like the silky top of a cat’s head.  Purrr.  For you, maybe they’re not your bag, hipster dufus material.  They’ll likely be at the outlet store in November.  I need them.  For me, working in an industry like pop radio, where the feeling of youth and cool is part of the product, these shoes help me, a middle aged creative, stay in touch with fashion and trends, the same qualities that our listeners hold dear.  Your frugal cycling side may see an unwarranted expense.  I admit.  I do feel a bit out of my skin as I wrestle them on with a shoe horn in the morning, but I see it sort of as an investment.  The second I lose sight of or fail to be directly involved in what our listeners hold dear, like (egads!) an appreciation for Miley Cyrus, I may be looking for a job at the oldies station. 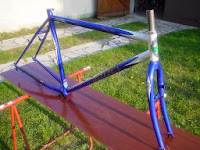 It makes me want to get a fake ID to actually lower my age, but I’ve been racing and ridiculously involved in cycling for longer than most juniors have been alive.  For God’s sake, there’s a 1991 Breezer Thunder in our bike stable, and that’s not even the vintage one in my book.  Every one of those juniors should know who Joe Breeze is.  I own a truing stand.  In my junior aged days, I circumnavigated Waukesha County on a bike with down-tube shifters and a boombox strapped to my front rack blaring “The Who.”  I’ve come back from ACL reconstruction surgery where my wife had to help me as I grunted attempting a single leg lift.  You’d think I’d know it all by now: training, mechanics, skills, speed, and history.  Yet, I have a coach. 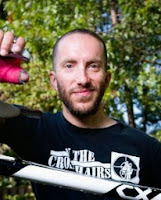 I look at having a coach like a trip to Uranus.  You might troll the boneyard next to the airport for parts, camp out in the science section of the library and actually build a rockin’ 1978 VW shaped spaceship, but you’re not going to feel the soft pale Uranus dirt between your toes without a little input from say perhaps…an actual rocket scientist.  The main reason I have a coach is so someone, a certified cycling dork, is vested as a shareholder in team Joe.  It’s no different than having a personal mentor or work consultant.  I could go pretty far on my own, perhaps land that VW mothership in a swimming pool the next county over and be on TMZ.  But, like those swanky blue shoes, my coach will take me where I’ve never been before...to Uranus.

His name is Chris Mayhew.  Learn more about him at the JBV Coaching Website.
Posted by Joe Biker at 12:26 PM No comments:

Vichyssoise and Types of #Cyclocross Mud

It has been said the Inuit have 400 names for snow.  It’s only urban legend of course.  The truth is the Inuit, like me, are just a very colorful, overly dramatic and adjective laden people.  Thinking about cyclocross however, there has to be 400 types of mud.  I’ve personally ridden in Bronchitis snot, Chunky Gazpacho, Stripper Wrasslin’ Mud, Cincinnati Chili and so on. 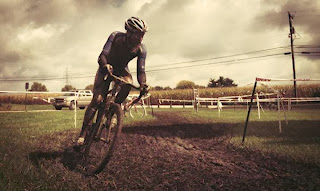 Saturday as the sun came out in Columbus, after 2 inches of rain, elite racers feared The Peanut Butter and not because of allergies.  Peanut Butter can quickly become Mesa Verde mud, named after the type of mud/grass mix the Anasazi used to build their cliff dwellings at the namesake National Park.  Consequently when that type freezes on contact, and can only be removed by a combination of welding torches and jack hammers, you get Dirty Igloo Mud, much like we had at Masters Worlds in Louisville this past winter.  See how that Inuit line came full-circle?

Back in Columbus Saturday, during the Masters race we had more of the chunky gazpacho type of mud.  It was a very wet mud, not as watery as the cold potato delicacy known as Vichyssoise mud or the romantic pottery mud from the movie Ghost.  Like an Italian wine with good nose, this mud featured delicate garnishes of grasses, hints of wild flowers and bites of thistles and briars.  On any Sunday afternoon in fall, you can find grandmothers selling the exact same mud concoction vacuum packed for $22/pickle jar with cute pastel labels as an anti-aging serum at the farmers market in Park City Utah.

Sadly, as witnessed first-hand after the elite women’s race, after the gazpacho spoiled in the sun for a half hour, it became Emotional Mud, the exact type of mud that will cause a 14 year old girl racer to become so upset she will snap at her family near the start/finish between bouts of shuddering tears.  Kudos to the entire women’s podium for consoling her after the race.  For obvious reasons, one of them being how I could be perceived as a creepy old masters racer, I had to leave the estrogenfest, but it was heartwarming.

Unlike the non-sticky Vichyssoise, Sunday’s mud stuck a bit to the bike but, due to the preponderance of puddles (I’m not sure if I’m using that word correctly, but the phrase sounds congressmanly awesome), washed itself off the bike every few hundred meters.  Shifters still shifted.  Brakes slowed.  The bike didn’t get that much heavier whether you rode 200 meters or 10 miles.  Not many switched bikes during the race.

That said, there is a point when a cyclocross racer should switch bikes due to mud accumulation.  Rather than go through the entire scientific calculation on my Garmin 8045S, (which has something to do with the depth of mud cubed, divided by pi and multiplied by the square root of the area of the starting grid) I’ll spell it out simply.  You need to ditch your bike a half lap before it gets bad.  It’s like deciding whether to add another cup of kale to your morning smoothie.  You have to know when to stop before you’re stuck with a liter of bitter green barf.  Like bike stopping mud, there is nothing worse than too much kale.


It should be elementary, especially for the well-educated cyclocross racer, but another confounding law of nature comes into play when racing cyclocross in the mud.  Bikes are slower in water.  Ka-pow!  Mushroom cloud above your head.  Blew your mind didn’t I?  Sure now, in your dry air-conditioned office with a heart rate 35% of max, it makes perfect sense that you would be hard pressed to ride 50 meters across an Olympic swimming pool.  However, every muddy race, I’m amazed how many people don’t realize bikes are fastest on smooth concrete.  Using these two known constants, you should be able to calculate the fastest way through any cyclocross course.  Ride the most solid ground possible, unless the reroute will cost you more time than riding over the slower surface.  However, sometimes in cyclocross common sense and elementary math are Hope Diamond-rare.
Posted by Joe Biker at 2:15 PM No comments: