Facebook Friday! What Was Tom Boonen Thinking at the Tour of California? 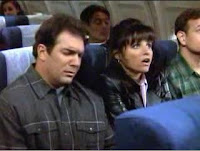 Did he leave the Belgian Waffle maker on?  At the Tour of California, I caught Tom Boonen in a David Putty moment.  You remember that episode of Seinfeld.  Elaine and her blockhead boyfriend are on a flight and he’s staring at the seatback in front of him for hours.  Before the Big Bear stage Tomeke was having a man moment at the start in Palmdale, staring off into space.  According to the Amgen TOC twitter feed, he dropped out 45 minutes after this photo was taken.  So what was on the Belgian National Champion’s mind?  We asked you?
It’s Facebook Friday on The Best Bike Blog Ever.  Every week we ask our FB likers and followers a question and post the comments on the blog.  Click here to join the fun next week.
This week’s question: What is Tom Boonen thinking about in this photo? 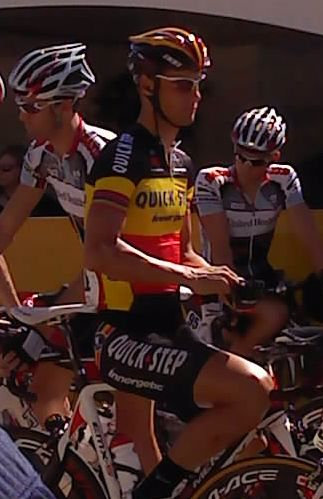 Geoff
Forget the coke, the medical pot they have here in cali is like so awesome, mmm, mellow.

Mark
"dang those guys on those cool Specialized bikes, I really miss my custom made frame"

Tim
I really hope the Fatburger and Skinnyfries I had last night stay down today.

Scott B
" damn, Lady Gaga and that exploding bra, you don't see that in Flanders everyday"

Dan
"If I give him the evil eye, maybe Floyd won't rat me out too."

Corey
What color should I paint the living room?

Jerry
Gotta Remember...shift to the easy gear before the hill.

Charley
Friggin roadies, why didn't I take up mountain biking?

Darryn
"If I have enough left after this race I'm totally going to win those pretzels at Ault Park (Cincinnati’s weekly crit series)."

Polly
Why am I in Lycra? I could be a real man out here in the mountains, just me and a navigator's bone ruler, some Fort Knox sunglasses, moccasins and that rugged American woman who once put a black widow on my head after making love, she could kill me with a look...

Bridget
"Should I pee now or can I hold it?
Posted by Joe Biker at 9:25 AM No comments: 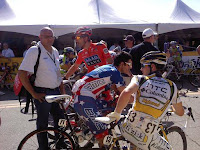 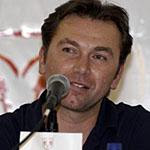 More giddy than a 12 year old girl at a Justin Bieber concert, my eyes ping-ponged from the tour buses to the sign-in chart at the start of the Big Bear Climb stage of the Tour of California in Palmdale.  Catching swag in front of the Radio Shack bus, I caught a glimpse of the Belgian champs jersey rolling by.  Tomeke!  He stopped to talk to a friend and, nearly peeing my pants, I ran up and nervously asked for an autograph.  I could never be a cycling reporter.  I'm too starstruck.  Hincapie, Cavendish, Spartacus...my heros of Flanders and Paris Roubaix were all about me.  I tapped Cav on the shoulder and asked him to sign and then passed the pen to Hincapie.  On a tip, a friend told me not to miss the start of a race.  He couldn't have been more right.  At the finish the racers spent carcasses disappear into the trailers, buses and team cars.  At the start, they're fresh, casual and all about the fans.  One disappointment though, pro cyclists sign autographs like doctors write prescriptions. 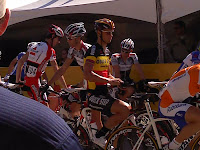 Can you match the pictures of my autographed cycling items on this page to the cycling stars pictured (hint, there are four autograph's and 5 superstars pictured? 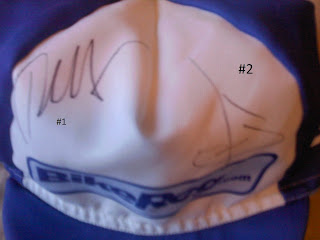 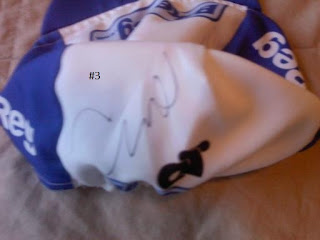 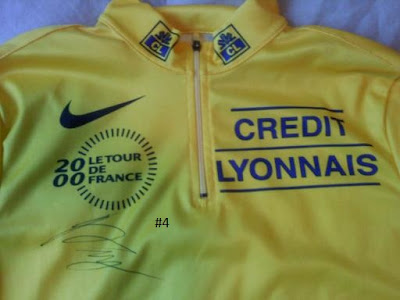 The Wages of Sin is Death…Say What?! 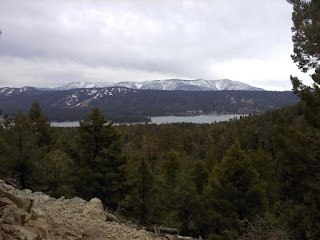 My Tour of California Big Bear climb raised my heart rate to say the least.  A few days before my cycling heroes would roll into town, we took a  hike of the Cougar Crest & Pacific Crest Trails above Big Bear Lake in California.  Huffing and puffing up an hour-long switch backed climb, we came across a patch of wide trail.  Big hunks of stumps littered the trailside.  Apparently the forest service was doing some thinning of the dead tree cover.  Two barkless stumps caught my eye, each 2 ½ feet tall and about the same diameter.  A dollar flagged each one.  Folded in thirds and stuck in the cracks on the edge of the wood you could clearly make out the “1” and half of a George Washington in the unmistakable greenback color from at least 15 yards away.  “Look a dollar!  And, another!” 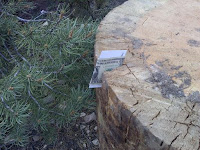 We stepped up.  As we drew closer we saw the dollars each blanketed a business card.  Hmm.  Fishy.  Money with a message.  Inquisitively I plucked one from the stump crack.  Not only was the buck wrapped around the business card, it was taped tight with clear Scotch tape, making it nearly impossible to snag the dollar without at least reading part of the card.

Reluctant to completely take the bait, I took a nibble.  I yanked on the card a few times till it pulled though the dollar, enough to see the card while leaving it still somewhat taped to the dollar.  The text on the plain white card looked like this: 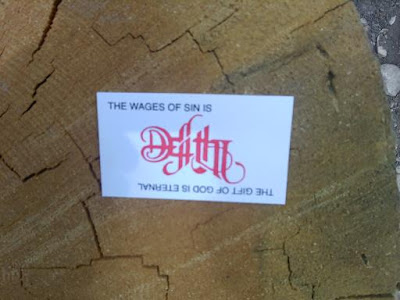 Yikes!  I quickly stuffed the card back in the dollar, noticing there was some church stuff printed on the back.  Then pulled it out again to snap a photo.
“Should we take it,” my wife asked.  “No.  Bad Karma,” I said stuffing the buck back into the stump crack.  We turned and continued our climb.  Then the thoughts stewed.  My wife wondered if it was the handiwork of the old guy with the trekking poles we passed earlier.  Maybe.  He was an odd looking guy, but kind.  He did say hi when we passed.  Then again, elderly people can be more Bible banger than most. 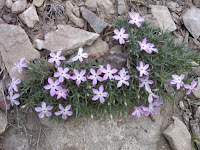 But, the message, it was so harsh.  Sin and DEATH?  It’s a dollar found in the woods.  It’s not stealing.  Where’s the sin in that?  Or, is it the modern day version of the biblical apple temptation?  Then I worried.  I touched the dollar.  What if it was covered in Anthrax or something deathly diabolical?  What if that old guy was a freaking Saw 5 psychopath and found an ingenious way to kill mountain bikers and hikers in the middle of nowhere?  Shit.  I rubbed my fingers in dirt and then cleaned ‘em off with water from my Camelback.  I know nothing about Anthrax, besides them being a rockin’ band, but washing couldn’t hurt.

Not axed in half by some lunatic and thankfully clear-headed, we made it to the top, snapped a few photos of tiny mountain flowers, and returned to the stump area about 2 ½ hours later.   The dollars and business cards were gone.  Someone else took the bait.  I was bummed.  By then, I had rationalized the perfect excuse to take the cash.  It was littering, pure and simple.  Pack it in, pack it out.  Who’s the sinner now?
Posted by Joe Biker at 2:03 PM No comments:

Facebook Friday! You Look Like You Could Use A Beer And Other Things Shouted At You On A Ride

It’s Facebook Friday on The Best Bike Blog Ever*.  This week’s topic sure put a thorn in your chamois and resulted in the most participated-in topic ever.  Woot.  During the week we ask our Facebook Friends (likers) a pressing question.  On Fridays, we lay it out so you can play it out.  If you’d like to be part of the fun, click on this link to the Best Bike Blog Ever’s Facebook page and “lick” it.  I mean “like” it.  This week’s question:
What is the most memorable thing a motorist has ever shouted at you while on a ride?

Carol: "You look like you could use a beer! Here sweetheart, take a cold one. I'm wore out just lookin’ at ya!"

Peter: Two of us were riding from St Rt 126 up the hill toward Wards Corner. I was in front and all of sudden heard this scream/yelp from my friend Michael as a car slowly rolled by me. Turns out the guy in the passenger seat leaned out the window and pinched Michael in the ass.

Butch: Hey sexy!! Complete with wolf whistle.  (The motorist was a male in a 70's vintage Chevy pickup truck)

Kim: 1975ish, east of Louisville on a group ride a pickup comes alongside and a very intoxicated guy yells "You F--King Q---rs” and tossed an open beer can at us! This of course is way before cell phones.  About a mile up the road the truck was being detained by the county boys. We rode by cheering!!  Ah the old days... 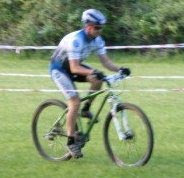 Tim: (I don’t know about) Shouted? I watched a guy vomit from the passenger window of a pickup about 25 feet ahead of me once.

Andrew: I don't know, I can never understand them. The barking dogs make more sense with their comments! 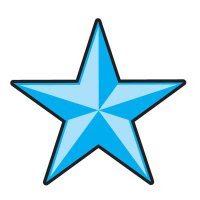 Nick:  How about the 20+ incarnations of some sort of "Go Lance", or the variations on find an F'ing bike trail.

David: This lady laid on her horn as she passed me and yelled something out the window. I, for some reason yelled back, "GET OFF THE ROAD!!!"

David S: Very early on a Sunday morning about 18 years ago a pickup pulled up along side of us and (the occupants) started throwing eggs.  Whoever was tossing wasn’t a very good shot, but sure made us wonder whether the kids went without bfast that morning or just drove around throwing eggs before church.

Dave: Three sweaty, shirtless guys squeezed into a small truck...all yelled the typical " F$#$ing Queer ! " They were practically laying on each other half-naked, and Im queer?

Harold: "Nice ass!" Normally this might have been cool, but the scary looking guy with the confederate flag and "git-r-dun" stickers on his rusty old Ford truck slowed way down to say it. Epic yikes!

Cameron: She was actually a pedestrian, but I had a girl in Morrow scream "Hey, penis!" at me once.

Dave (again): Not yelled, but thrown: A FULL bag of Burger king stuff. Dude had literally had just driven out of the drive thru. Yeah, I was tempted to have a mid-ride snack.

James: "Put some saddles on your bikes!" Lil Bjet and I were dancing on the peddles up the steep section of Ibold. I had to laugh.  It did look like we were preventing a velo-enema.

Christopher: "Stay out of my Fucking way," as they whizzed passed my handle bar clipping me with the side mirror.  Sometimes I have heard a few whistles...they are not always bad comments.

Not That Lance: While slowly rolling up to an intersection, a car rolls up in the left lane and squeezes into my lane nearly hitting my bike. The passenger's side window rolls down and one of the two little old women said "You boys aren't supposed to be in the road.  Get on the sidewalk."  Then the window rolled up and the car continued to move to the right. There wasn't a sidewalk for miles.

Mark:  South side of Columbus, "Hey, I really like those flames on your clothes.  That is one badass outfit."

Peter (again): At the 4-way intersection in Maineville a shirtless guy in a car going the other direction stands through the sunroof and yells, “F$@% You” at the top of his lungs. It is now called the FU intersection.

Marisel: The honks from the SUVs in Prospect Park, Bklyn are more memorable than anywords could ever be! 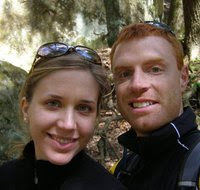 Jason: Imagine the stereotypical adolescent carrying his pants in Price Hill (a rough neighborhood).  Then imagine him saying this to me during hill repeats on my 5th time up Quebec, "You got this."  It still brings a smile to my face.
Posted by Joe Biker at 11:30 AM 2 comments: