It’s Not About The Barriers: Risk, Reward and the Cyclocross Course 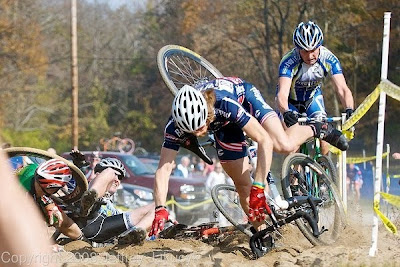 The worst and the best cyclocross courses, I’ve raced them both. While you remember Cyclocross courses for certain features, the difference between a good and bad course rarely comes down to sand pits, log barriers, off cambers or cool hand built flyovers. The great courses offer risk and reward. (pictured above Masters racers take the risk of a fast entry into a 3 wide sand pit at OVCX Gun Club Race, 2008 Milford Ohio) 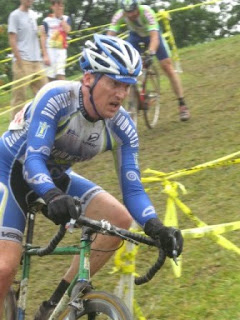 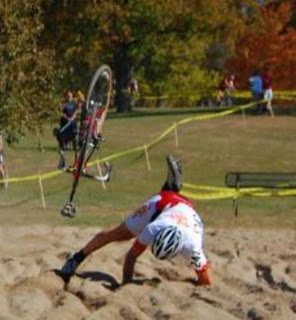 Good observations, Joe. Definitely something to think about during course set-up. Duane, the rest of the BC/TL crew, and myself will be looking at the Fisherman's course this weekend, so nice timing.

The other thing those of us that raced both days at KingsCX learned is a course can be turned upside down, simply by running the course the opposite way you thought it should run. It might have more climbing, less, faster, flow better, or slower. I agree Joe, there is a fine line there to how much of that can of spray tools you use - too much, you spend so much time off your bike or going so slow, the fun factor is gone, too little and it's a crit course on grass. Mohican State Forest is a great example. Ride that backwards, it looses all its fun factor. But step into it anywhere along the trail and it's fun counter clockwise.