In Heaven There Is No Clipless Pedals …or spandex cycling shorts for that matter. I just returned from a week in Whistler, BC the home of the Nordic events of the 2010 Winter Olympics based in Vancouver. I have the Quatchi souvenir Olympic lunch box to prove it. We and maybe three other people were the only cyclists without platform pedals, baggy shorts and more suspension on our rental car than our bikes.

While expensive, Whistler is Heaven, not only in the sense of gorgeous freshwater mountain lakes surrounded by lush glaciated peaks fed by a network of great bike trails and paths, but also in the sense of pretty much any sport that that has ever graced the cover of Outside Magazine you can do in Whistler. Hiking, mountain climbing, bouldering, zip lining, eco-touring, kayaking, bungee jumping, canoeing, sky-gliding, horseback riding, ATVing, or skiing, you name it and you can do it in Whistler. While Breckenridge and Park City continue to draw more summer vacationers each time I visit, they are still only a notch above ghost town when compared to Whistler. The only difference between having a beer at the base of Whistler Mountain in September and January is the temperature and those coming down the hill in September have big bombing downhill bikes rather than ski’s and snowboards. The place was packed with people and bikes! However, I have a love-hate relationship with cycling in Whistler.

We love taking summer vacations to ski-areas more or less for the great cycling and off-peak rates. Whistler is a bit different than say a Breckenridge or a Park City. Whistler, at about 2100 feet above sea level, doesn’t have the altitude to make a fit person get a head rush climbing the stairs to the post office. If you want to travel from a low lying city like Cincinnati and go out for a five hour hike or ride or paddle in the mountains the minute you get off the plane, Whistler is the place no Sherpa or acclimatizing necessary. My big problem with Whistler is the mountain biking.

Yes. I have an issue with mountain biking in Whistler.

The issue is that the trails in Whistler are marked with easy, intermediate and expert signs when they should be marked with cartoon pictures of testicles: one small nut for easy and three huge ones for expert. I’m not talking about the downhill mountain bike park. When you put your bike up on a ski lift and are surrounded by people with full face helmets, body armor, and enough suspension to make a Hummer jealous, you know what you’re getting yourself into and you better have a big nut sack. Believe me, there were plenty of dudes wearing casts walking, hobbling or wheeling their chairs through Whistler Village to prove it. I’m talking about Whistler’s general single track trails around town, what you might call cross country trails. The Whistler Valley trail maps may try to deceive you with a variety of expert, intermediate (sign above says it all) and easy trails. There are really only two types of unpaved trails in Whistler: awkward rooty and rocky with varying degrees of drop offs or wood structures or silky smooth crushed gravel easy trails and fire roads.

Durango, Breckenridge, Park City, Pisgah, Tsali, you name it they’re all packed with what I’d call great cross country mountain bike trails. Trails that usually start out with a nice long climb and level out on some sort of ridgeline trail that traverses the mountain side. When I laid the Whistler map across the coffee table, I eyed the Intermediate (blue) Rainbow Sproat trail and a drip of drool plopped on the map. It appeared as I described above. However detailed, topo maps don’t show endless rock gardens, drop offs and the density of 4 inch tree roots per mile. While the double/single track climb was fine, when I got to the actual Rainbow Sproat Trail, it was an unrelenting exercise at maneuvering through the obstacles: rocks and roots and surprise drops. Don’t get me wrong, I did enjoy the challenge. I cleaned most of it on a sweet XT equipped rented Rocky Mountain Element from Summit Bikes. Even though the switchbacks were fun and the scenic payoff at Rainbow Falls was breathtaking, I really didn’t enjoy the riding itself. 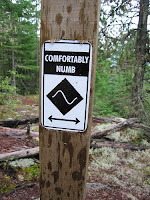 I have daydreams about the Peaks Trail in Breckenridge and the Mid-Mountain Trail in Park City. Just like Whistler, the climbs are tough and so are the various drops, rocks and roots. Unlike Whistler, the technical sections of other mountain town trails are broken up between long stretches of flowing single track. Single track that makes you say woo-hoo as you whiz through hours and miles of forests and meadows. Whistler single track is all tough and technical. By the time I rode the intermediate ranked Rainbow Sproat, Cut Yer Bars, the tight single track at Long Lake Park and watching my wife wreck on a trail called Blueberry…I didn’t dare tackle any expert trails (photo of Comfotably Numb trail junction in Long Lake Park) without a bigger bike and more protective gear.

Whistler trails, more specifically the intermediate and expert ones, all require expert technical ability. The only discernable difference I could see between expert and intermediate trails was the size of the dropoffs or how high the wooden bridges were. Twenty meters into any intermediate trail and I soon realized why so many people were wearing body armor and baggy shorts, had platform pedals and their saddle lowered on trails outside of the ski lift area. That’s cool, if you know what you’re getting yourself into. So, now you know what you’re getting yourself into. There's no middle ground in Whistler. It's body armor or basically bike path.

Till I vacationed in Whistler, I never saw the need for more than 100mm of front suspension or to lower my saddle or wear body armor or to go with platform pedals. Although from time to time I’d prefer a full suspension XC bike, I’d take my Niner Air 9 hard tail to Breckenridge, Park City, Durango, Moab, Pisgah, Tsali or dark West Virginia single track in a heart beat. My Niner in Whistler would be like bringing a knife to a gunfight.

Whistler made me realize my favorite mountain biking combines the free flowing beauty of Whistler’s “easy” trails with the occasional challenge of Whistlers rocks, roots and drop-offs. It's just that In Whistler, you can't have both at the same time.