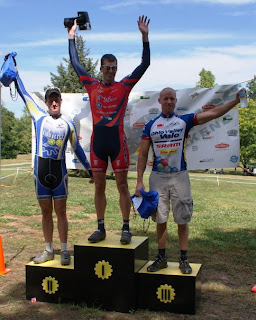 Ha. Look at that guy on the left. He looks like a spinning ballerina statuette on top of a little girl’s musical jewelry box. I can say that, because that less than manly man is me. This is the first time I’ve ever stepped on a podium and it shows. I’ve won two other races, had some 2nd’s and 3rd’s, but this is the only time I’ve been on an actual podium with actual photographers actually posting the picture to actual Facebook pages and race websites. I’ve got a lot to learn.

Take the stud who won the race, Peter Hills. He owns the podium like a freaking cyclocross super hero, which unfortunately makes my pretty pirouette pose look even prissier. For chrisakes, I’m holding my prize bag like a bride about to toss her bouquet of Black Eyed Susan’s. I’m surprised they didn’t take my man card away after that shot. Below is a photo of me mid-race, just to prove I can look hard-ass on a bike.

If you spend hours training, polishing your technique, drilling your skills, practicing tactics, you should at least practice your podium. Seriously. Sort of. Close the bathroom door. Stand in front of the mirror and do a couple intervals while saying the word “confidence.” Hands up. Hands down. Hands up. Hands down. Three sets of five, once a week.

The more I dissect my embarrassing lack of podium prowess; I’ve realized a good podium composition is all about confidence. Just look at the 3rd place guy. Steve Bivens may have a Masters aged hairline, but he’s all confidence. “Yeah, uh huh, I scrapped it out for 3rd with these guns. Please, hold your applause while the announcer is talking.” Meanwhile I look like I’m a geriatric with my pants pulled up too high simultaneously pinching back a turtle head.

When I first heard I was to report to the podium, I did the mental checklist: clean kit, check, sponsor brand hat, yup…well that’s it I guess. I never even considered the pose or the fact that 9 people would be snapping photos from all angles. So here’s what I can offer on how to take a good podium photo and make your teammates and sponsors proud:

Confidence. Own the catwalk…I mean the podium. Don’t look surprised or relieved.

Be stoic. Stand still, legs shoulder width apart with equal weight on each leg. You are Adonis.

Flex those quads. Show the guns that shot the others down.

Give a presidential smile. Don’t smile like you saw a cute puppy. Smile like you’ve just signed the peace treaty and are bringing the troops back home.

Raise both hands when they say “hands up” but slightly bend them at the elbows to show you actually have some muscle and body tone and don’t end up looking like your skinsuit is a sausage casing.

Don’t try to play to individual cameras or you could get caught off guard in mid-glance.

Unless you have a sponsor obligation, don’t wear a hat. Hat’s hide your chiseled jawbones and intimidating caloric deficit gaunt.

Very thoughtfull post on confidence .It should be very much helpfull

Lame comment on a blog post that has not a whole lot to do with confidence. Maybe try reading posts before associating your crapass website with my blog.

Joe -- are you talking back to blog spam?!

(that's me on the right)

Oh that's a funny photo - almost like the other two can sense your spirit!

Yeah. I hate the comment spammers. If they even showed a hint of reading the article, I wouldn't mind the link. Oh well, the price we pay for open moderation.