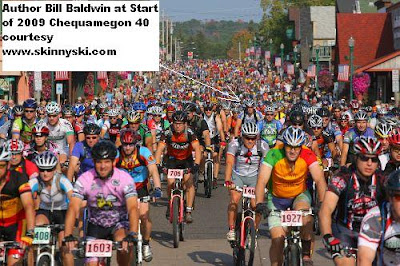 Conditions were perfect, if not a bit dry. Temperature was 65 at the 10 am start and climbed to about 75 by mid-afternoon. The venue is beautiful -- extremely isolated in rolling hills, blanketed with 80-foot stands of pine trees. The 40.9 mile point-to-point course from Hayward to the Telemark Resort started with a 2-mile paced rollout on pavement through cheering throngs of onlookers in the town of Hayward (risk being DQ'd if you try to pass the four-wheelers leading the rollout). Riding in a pack of 1,778 adrenaline-pumped mountain bikers was a huge thrill, and pretty sketchy as the pack lurched, then slowed, then lurched, then slowed all the way to the dirt. Although I placed my bike in the start chute at 5:45 am, it was not early enough to get me any closer than the 200-300th starting position. So I was completely surrounded during the rollout. Once we hit the fields that led to the Birkebeiner Cross-Country Ski Trail (the "Birkie"), the race began in earnest with the elite/pros flying off the front en masse and everyone else jockeying for position. 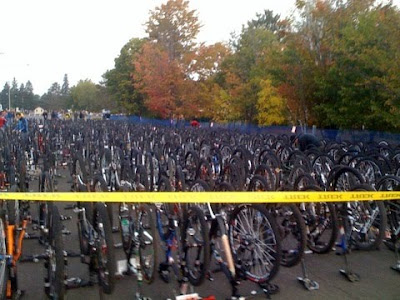 Aside from the first couple miles, passing is not an issue on this course. For most of its length, the Birkie Trail is wide enough for four automobiles to drive abreast. It's mostly trimmed grass (think lawn), bordered by towering trees, with a strand of singletrack running the middle. A good portion of the race also covered gravel/dirt forest roads, with a few sections of true singletrack. Although the course is fast, it is by no means flat, best characterized as rolling terrain punctuated by several power climbs followed by immediate descents each mile. And while the course gains quite a bit of altitude over its length, there are some ripping fast descents, with the last half-mile shooting diagonally down the face of a ski hill to a 90 degree turn partially back up the hill before leveling off to the finish. The last 3-4 miles of the race is actually brutally (like Mohican) hilly, getting up to the top of the ski hill for the final descent. And frequently the descents ended in sand pits where it took good handling skills to hold your line at high speed. I remember having the sensation of Tokyo-drifting the turns on a number of gravel downhills. The dry conditions made for a ton of dust -- most racers at the finish line looked like coal miners coming off a shift underground.

The winner set a new course record at 2:02 and, from the account I read, won by less than a one-second margin, as the second place finisher apparently took an insane line down the ski hill to make up about 100 yards in the last quarter mile. Personally I had a great race up until mile 25 when my sciatic nerve acted up and wouldn't let me push the big ring anymore. Although I was inexplicably able to kill the climbs during the last 10 miles, I couldn't generate the power needed to hammer with the pack I had maintained contact with for most of the race. My bike was set up perfectly for the race with Mitch's fully rigid carbon fiber fork. (Thanks Mitch!!) I flew past fellow racers on the steep technical climbs, including the Seeley Fire Tower which is a four-tiered, half-mile, fall-line beast of a climb about 30 miles into the race. On the climbs I was easily passing guys who could hammer me on the flats, only to have them drop me within a qurter mile after the climb. Still, it was extremely gratifying to have the bystanders complimenting my climbing in those tough sections where half the racers were running their bikes up. (Which made it more frustrating to have the back and leg issues prevent me from keeping pace on the flatter sections toward the end.) I ended up finishing in 2:42 for a pedestrian 409/1,778. To give you an idea of the volume of riders on the course, if I had finished only 10 minutes faster it would have been good for 250th. There were a lot of fast guys (and girls) out there.

Overall I'd say the race organizers pretty much have the formula down -- it was a great festival atmosphere with a focus on bands, beer and grilled meat. It's worth noting that there are an additional 800+ racers at the finish line who complete the "Short and Fat" race, which is about a 15-miler that covers a separate course but finishes down the same downhill and at the same time as the 40-miler. A great laid back vibe permeated, and everyone was very friendly. (Of course the excellent weather played a big part in the event's success.) Although I probably wouldn't do it again because of the amount of travel involved, I'm really glad I got to experience this race. Especially those of you without kids should really consider making the trek -- you won't be disappointed. Do it!!