When Joe and I talked about me being a guest blogger during Nationals he said be funny. Funny is hard to create sometimes, especially when you are focused so hard on getting kids ready to race and get them to the start line without screaming bloody murder and running home to mommy. Some times funny is created all on its own.

The weather created all the humor we needed today. In a single day we experienced 12 seasons and some were concerned that a plague of locusts would appear. While locusts would make for great photos and an even greater story, there was much relief that they didn't actually appear. There were six races today and each one had their own micro climate.

Overnight it rained non stop. On top of already having to pump water out of the course to prevent issuing USA Cycling canoe paddles, the course was receiving a constant barrage of water from 5pm yesterday. So, when riders arrived for the 8:30am race it was approximately 34 degrees and still spitting some moisture from the sky. There was a fine slush on the paved sections and the mud was slimey and slippery in all directions.

At 9:30 when Morgan Webb and the rest of the 40-44 group hit the course rain turned to snow. But, not just any snow. The flakes were big enough that I am almost certain that kids were catching them and throwing them at riders. Visions of snowmaggedon danced through my head as I watched. At 10:30 for the Juniors 15-16 race that snow turned to rain and got more intense. The use of an umbrella was required while out trying to watch the riders navigate the course. The soupy parts were thick and people could be seen having their boots removed from their feet after getting stuck in the mud.

After lunch the U23 race started with a full sun and 50+ degrees. The sun came out, people were jubilant and the riders rode without any moisture hitting them from the sky. This elation from the crowd came to a quick end as the very next race started with winds howling at 20+ mph and tearing tents from the team parking area and flinging them through the vicinity. This was followed by getting cold again.

Rather than try to further explain this in a way that anyone can comprehend, I am just going to share pictures of local riders trying to navigate this muck. The pictures say way more than I can describe and are way funnier than I can ever be. Plus, I am tired and want sleep... 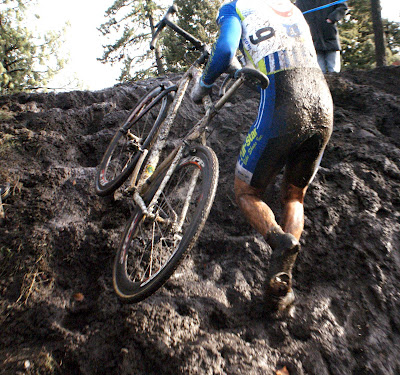