CX Nats: Day 3 - Juniors, Not Quite as Old Guys, and the Crowd Thickens

Day three of Nationals brings to the table an entire morning of junior racing following by some guys that aren't quite as old as the guys that raced yesterday. What you really start to notice on Friday is that the crowd starts to arrive. Before we check in on the racing, let's cover some course facts.

Cyclocross is a sport of tough men and women - their motto is and should be "bring it on". Today we witnessed a bit of a juxtaposition on this motto. In the very first race we had our junior women racing, a total of 30 girls 13 and under hitting the course at 8am. Overnight there was another inch or so of rain that fell on the course, and this morning when we woke up it was snowing lightly. With the temperatures hovering right around freezing and a noticeably slippery surface on the sidewalks we know the course would be slick.

These girls were tough and attacked the course sharply at 8am, complete with freshly broken ice through the 6-8" lakes around the course and a frozen bridge, aka flyover. Unfortunately some girls got the frozen bridge and found no traction available on the bridge - it was snot on a doorknob type of slippery. The girls persevered and made a race of it.

Fast forward a couple hours. Word came down during the day through various channels that the UCI was "unimpressed" with the many lakes found on the course. When they surveyed the course they were confused, they had heard of Minnesota and the land of 10,000 lakes, but their plane tickets said Oregon on them. Once that was behind them they asked them to be "lowered" some. The Best Bike Blog Ever broke that news to twitter early in the day and later we saw pumps in action, lowering those lakes for the rough and tough UCI level competition to take their crack at the course.

You can see that a nice puddle of water is very good for Junior level racing and created quite a dramatic photography moment. Unfortunately this is a moment we won't see for the best riders of our country. The next photo is of the pump after the drainage. 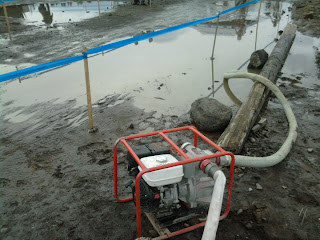 Now that I think of it, the Men 45-49 were the first ones to experience the course without this lake effect. It all makes sense to me now. The juniors can now tell their dad's that they had to make the course easier for the dad's to race - wouldn't want them to cry or anything.

Back to the racing for some recaps.

The juniors racing was awesome and scary at the same moment. These kids are very, very fast. So fast that they make me want to retire to prevent myself from getting lapped by these kids. In the spirit of the Best Bike Blog Ever, I thought I might reassure Joe and show him that fast juniors have pain faces too. In some cases I am almost certain there have been training classes held without my knowledge, working these kids in to this level of Pain Face form.

Later in the day we saw some dads racing, including the winner of the race I entered last year. Don Myrah was the name repeatedly called out over the loudspeaker last year when I race at CX Nationals for the first time, and again today would have his name bandied about the Bend CX course. The 1992 member of the Olympic MTB team made the rest of the dad's look, well, like members of the 1992 Powder Puff football team. From the OVCX region we had Michael McShane and Jonathan Card in the mix, both of whom are extremely fast riders, but Myrah simply powered away from everyone.

This race was the beginning of the big races. Now that Friday afternoon hit the crowds will grow to "mob" level very quickly. In the dad's race it was very obvious and will only get thicker as we creep to Sunday. The good news with large crowds? Lots of "sight-seeing". The crowd has been tame thus far, but starting tomorrow that all changes. With the weekend will come more beer, which means more hilarity. We may not be in Belgium, but from the pictures you won't be able to tell for the next couple of days. 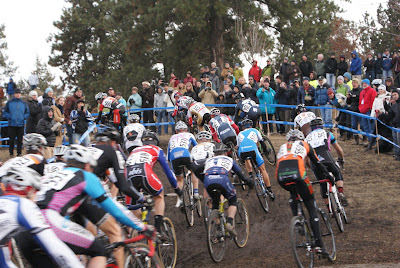