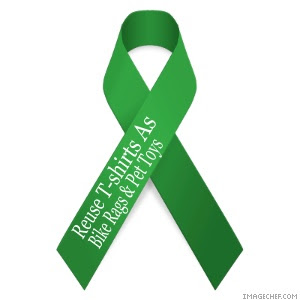 On New Years Eve, like every other American, I frantically rip through my closet, garage and crannies to pull out the weird hats, funky party-boy shirts, bedazzled shoes and donate the fashionable lot Goodwill.  Today’s the last day to donate to charity in order to get the deduction on your taxes for this calendar year.  Then, like every other American on New Years Eve, we take our pink receipts home, cheer that we made the deadline at midnight and party till we puke.

I got a head start yesterday.  As the pile of fashion cast off’s overtook my bed, I realized that I had at least eight t-shirts in the pile.  While I had found enough flaws with them to remove them from my ’09 wardrobe, I realized I still had use for them…as bike rags and cat toys.  With my patented Best Bike Rags and Pet Toys Ever technique, I could get eight bike rags out of every shirt and make one giant super-fun cat or dog toy with the scraps.  Here’s how to turn your ugly closet fodder freebee bike race t-shirts into something green like bike rags and pet toys.

Start with the tool of the trade: a Fiskars fabric scissors.  These are like the Campy Record of the scissors world.  Even the most man-handed of us all can nearly cut a straight line in one of these.  Nearly.  Granted you won’t win any bonus points for your technique from Grandma, you’re guaranteed to get relatively uniform sized straight edged bike rags with one of these babies. 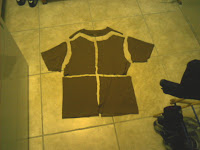 Step 1: Starting at the shoulder, cut off both of the collar bone seams and neck in one piece.  (see photo at left for reference)  You’ll need this neck/shoulder part later to make your supa-fun cat/dog toy.

Step 2: Cut off the sleeves.  Then make a cut so each sleeve is no longer an arm-tube, but instead a nice little rag perfect for those hard to reach places on your bike.

Step 3: Cut the shirt horizontally about 3 inches south of the armpits.

Step 4: On the top half, cut the little piece of 3 inch fabric between the armpit and the horizontal cut.

Congratulations!  You now have eight bike rags: two small from the arms, 4 medium from the upper torso, 2 large from the tummy. 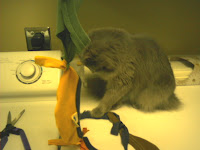 For cats, tie all the shoulder-neck parts together in a big long multi colored “cat dancer.”  Drag it on the floor and your cat will follow you around forever.  Whip it up in the air and see kitty do bitchin’ Olympic style aerial moves.  Or, tie it to the banister of the stairs and watch kitty fruitlessly try to grab and run away with it only for the toy to win the tug-of-war every time.

We donated on the 31st as well. I think it was 4 bags of T-shirts. About 20 of them said HFP-Kenda MTB race series something on them - it was time for them to go.
Key to the tax break is to start making a pile, keep a clipboard, paper and pen handy - write it down as you as it to the box/bag. That way you have a running list and can add it to your tax deductions later.

Yup. We made a list too. However, I still couldn't part with a few trophy t-shirts like one from the first ever Trek Kettle Morraine Fall Color Festival in Wisconsin. I raced sport and Travis Brown lapped me through the start finish. It was the classic, quick take a picture, I'm in front of Travis Brown and his sideburns.