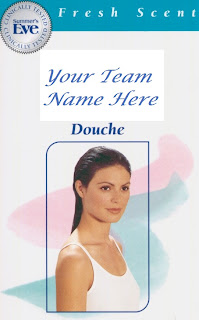 You’re only as cool as the biggest douche on your team.  I ride for a shop team, BioWheels-Reece/Campbell Racing.  If one of my teammates were to run a stoplight, I run a stoplight.  If one the riders on the team litters a GU wrapper, it may as well have been me.  However, perception is reality.  Truth is you’re not only a douche to the rest of us who are in the know about bike racing teams and group rides.  Outside our little two-wheeled Kumbayah singing Cincinnati circle you’re not on a team or the weekly group ride, you’re a part of a larger group known as those bike riders.

This past week a local team got thrown under the virtual Facebook bus.  I’d name them, but at this point it’d be rubbing salt in the already oozing road rash.  A veteran rider pointed out he saw the team run a red light in busy traffic.  A day or two earlier, a team member was seen littering a wrapper.  Ba bam!  They were called out on Facebook by their team name, the equivalent of an atomic public chamois wedgie.  Right now they are wishing they had eaten Spanish steaks via a syringe.

Needless to say, they won’t be making “the list” anytime soon.  It’s too bad.  There are a lot of great people on that team, friends of mine, well educated people, true advocates of the sport and the city.  However, it wasn’t so-and-so who littered or ran the red light.  To those that witnessed the events, it was the team.

Then again, as the veteran rider pointed out, it wasn’t only the team.  Motorists and city residents don’t associate certain color combinations of spandex as team uniforms.  That’s inside information.  Yesterday I was talking to a neighbor of a friend while in my kit that says BioWheels in 19 different places.  We were chatting about local bike shops.  They didn’t even realize that I was wearing a BioWheels team uniform and my friend was wearing Smitty’s kit, two area shops only miles away.  Regular people only see people on bikes.  When they see someone litter or run a red light, they see you, a bike rider.
Posted by Joe Biker at 10:49 AM

A reader brought up a point to me and I thought it had good merit. As written, the post neither condones or poo-poos calling a team out in public for the actions of an individual. I apologize for that oversight.

Some will argue that, despite being hurtful, the "calling out" brought the issue to light. Others will argue that it may stew some bad blood. That is why individuals or teams were not mentioned in the post. To me, that does no good and I never intended to rub salt in the road rash.

In writing this post, I can only hope that we can all agree that the actions of an individual on a bike affect the perception cyclists in general. We're all part of a bigger team, the cycling community, and certainly should do what we can to ensure that we're represented to the general public in the most positive way possible.

Thank you for reading.