Cyclocross Carbon Fork Brake Shudder: I’m No Engineer But I Think I Have This Figured Out 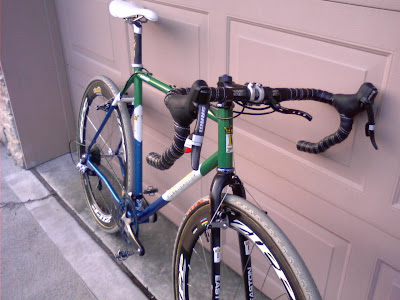 I inadvertently performed a bike experiment last night after work. I took my cyclocross bike, an Indy Fab Planet X with an Easton EC90x carbon fork for a spin at a nearby park. Since the glue job on the Zipp 404 CX tubulars was fairly new, over the past week I kept the air pressure high to make sure the glue cured and stuck to riding the roads and bike path while I dialed in the fit. Yesterday was my first cyclocross style ride with the tires at cross pressures. Instead of driving the mile to the park, I decided I’d just let some air out of the tires in the parking lot at work and ride over to the park. I guessed at it and let air out until I could squish the Vittoria file tread really good with my thumb. The ride in the park for the most part was fine, although the pressure was probably a tish too low on the hard ground. The bike felt like it was pushing to the outside in corners (as if the tire was sort of rolling under the rim.) Since my pump was a mile away, I just dialed back the cornering speed and went on with my ride. Coming down the steep road back to my car at work, I hit the brakes, and I felt the familiar tug-tug-tug of brake shudder. I could see the ends of the fork blade move. Son of a!

I had been riding this bike for at least a week and a half with the tires over 60 psi with no brake shudder. Now the tires were at the extreme opposite (guessing around 28-30-remember I let air out without a guage), probably a few PSI too low for hardpack causing a little shudder when slowing at the bottom of a paved hill. I knew about the possibility of brake shudder with carbon cyclocross forks and consequently hung on to my trusty steel fork in case this was to happen. However, I hardly think it’s time to ditch the carbon fork. You have to admit, it’s pretty rare to have a paved descent in a CX race. I didn't feel a single bit of shudder or snap while riding in the park and I even bombed a few grassy downhills where I had to brake into a corner.

It was a long hill; long enough to hit the brakes and watch what was happening. The brakes were slowing the wheel, but the tire was spinning just a bit faster. When I hit the brakes, the tires traveled a little further than the rim, causing the sidewall of the tire to give a bit and in reaction, causing the fork to flex under the bike with the grabby pressure. Ah ha!

Of course, putting the steel fork back on would reduce the shudder. But, I don’t think the problem is severe enough to add a pound back to the bike. I also think brake shudder isn’t the correct description. It’s more like fork snap. I think Carbon forks are stiffer and snappier. We all know steel has a very soft and easy flex to it. I think the steel fork flexed too, but it never snapped back to shape as quickly as the carbon. It’s like the difference between bamboo and pine. Both forks will flex under braking pressure. It’s just that the carbon fork will snap back into shape while the steel fork will flex, stay in the flexed position longer and go back to it’s original shape more slowly and less noticeably when the pressure if relieved. In addition the IF steel fork has a greater degree of rake, (48mm compared to the carbon’s 45mm). From the beginning the steel fork puts the contact area of the tire more forward than that of the Easton EC90x.

You can do a few things to minimize the “snap.” The usual fix is to try toeing in the brakes which will put less initial brake pad in contact with the rim surface, which I assume reduces initial braking power, makes braking more linear or gradual, and consequently reduce the fork flex at the other end. However, I think that’s only half, or more likely a quarter of the solution. I think tire construction, the grippiness of brake pads, tire pressure, fork rake and even the hardness of the ground play an equal role. I would go even as far to assume a tubular with a soft cotton sidewall and latex inner tube (like a Challenge or Dugast), would cause more carbon fork snap than say a Tufo or Vittoria with a thicker sidewall and standard rubber inner tube. The ground was hard yesterday, I really only needed to run low enough pressure for comfort and keep the tires from rolling in the corners. I think a few more PSI would’ve made all the difference. The other thing to note is that I didn’t feel any fork snap during the CX practice. It didn’t snap until bombing down a long paved hill.

I think the trick is to keep enough air in the tires so that they hold their shape in the given conditions. This optimal pressure will change with the course and conditions. If the tires hold their shape, that’ll give the contact patch of the tire less opportunity to get under the fork and pull it backwards. The fork snap should be reduced. Air is the least expensive of the possible combination of solutions.

Ahh. Fhew. Time to put on my smoking jacket and ease into my high-backed leather chair with a snifter of brandy.

Yeah...that hurt my noggin too. I swear dialing in a crossbike is like figuring out how to get an extra mph out of a NASCAR. 2 less psi with a paved downhill and shudder. 2 more psi and a grassy downhill no shudder. A quarter turn of the wedge adjustment sends ya into the wall.

Here's a sidenote: the fork performed perfectly at cyclocross practice last night, on one of the faster courses in the area. I bombed downhills while braking into corners without any shudder. I was really surprised at how well the EC90x could hold a corner, on more than one occasion I was able to dive and cut the inside line on tight corners. Also made the bike feel lighter and snappier when climbing the quick little hills. It's a keeper.

due to recent car-dooring, the roady's out of commission and i've been riding the cross bike to work, a caad9 x, sporting 23c road w/ tubes for road duty.

at 110 psi, i'm still getting crazy death shudder, even worse than when i was using my tubeless @ 32 psi!!

I too have an ec90x fork that made me nuts for a long time. Enough that I didn't ride the bike (basically) for 2 years. Since I broke my cargo bike frame, I was forced to turn my cyclocross rig into a commuter/touring bike. I searched far and wide for answers. I toe-d in my front pads all silly and inefficient-like - but still got the death chatter. And the screech - unruly.
About to switch to a v-brake setup, due to inability to elegantly reducing the front free-cable length, I spoke with a mechanic who suggested that the bike (RM cxr) had been spec'd with a poor choice of front brake PADS. I threw some (short) road bike pads onto the canti's, toed them in, and voila! Life has been beautiful for a few years now!
Apologies for not getting into the 'why's' and such of the diff between road vs grass, b/c if this works for you - groovy. Just saying, that I have solved the same issue - with a different method.
I'm just glad to hear of another who is seeing their life flash before their eyes a bit less often:)
Cheers! And thanks for sharing!