Riding the Allegheny Passage and C&O Canal: The Drenching (Part 6 of 7) 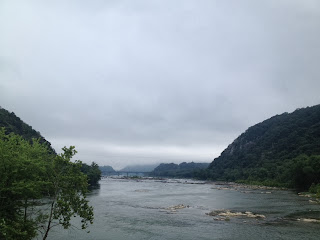 If you’ve ever wondered how far that bike path goes, last year, Cincinnati Cyclists Marty Sanders and Aaron Kent (AK) set out to cover 700 miles of the Great Allegheny Passage and the Chesapeake & Ohio Canal by bike.  Over the past few years, Marty has become a veteran of these rails to trails trips while Aaron, even though a long time cyclist, was new to the idea of a week-long self-supported adventure.  The story is presented in seven parts.

The rain had picked up considerably and woke me early.  At times, the rat-a-tat-tat on the thin roof of the bunkhouse was at times almost deafening.  I couldn’t fall back asleep.  At 5 a.m. I read the news and checked weather on my phone. The forecast didn’t look good.  More storms were predicted after 10 a.m. and the front was coming from the direction we were headed.  I was tempted on wake up AK to get a jump on the weather, but I knew we both needed more rest.  I put my phone down and closed my eyes. 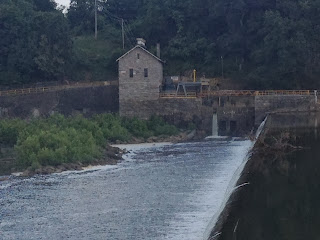 Something made a loud noise behind the bunk.  I switched my flashlight on only to see a large mouse scurry off with some of AK's food.  I got up.  The mouse even managed to get a nuun container open. I had no coffee, but there were those three beers in the bunkhouse cooler.  Still cold, I normally wouldn’t consider drinking beer at this time of day, but figured what the hell, morning beer.


As we started getting things in order, the father and son who had shared the bunkhouse with us were getting up.  I remember hearing the father say something like “I've slept better standing up!”

Aaron, the son and bike messenger from Philly mentioned that the Eastern Maryland Rail Trail paralleled the C&O for 20 miles and we were at the 10-mile point.  We basically had a dry, paved warm-up, if we chose.  Aaron and his father were gone before us, hoping to get to Cumberland by day’s end.

We would soon follow, but needed coffee first.  Krispy Kreme donuts and coffee at the Speedway wasn’t exactly as awesome as I thought.  AK was feeling terrible.  Other than my hands being sore, bruised and cut from yesterday’s wreck, I was OK.  Before we headed out, we went back to the bicycle shop to thank the owner for taking care of us. We offered a tip, but he refused.  So, we bought more stuff. 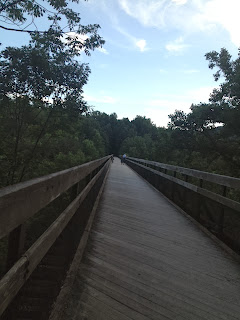 The Eastern Maryland Trail head was just outside the bicycle shop and a welcome change.  With a nice wooden rail on one, some sections cut through stone, and a vista of the C&O Canal off to the side, it was an excellent trail.


Transitioning on to the C&O Trail was simple.  We crossed over a lock.  As we rolled onto the trail, you could tell from the standing water that the rain had come down hard the night before.   Thankfully, there was room to avoid the puddles.

After 15 miles, we took advantage of a lock.  I leaned my bicycle up against a tree and used the port-o-let.  When I exited, AK was standing on the edge of the canal wall.  “Check out the snake,” he says.  It was thick with a diamond shaped head.  Just as I said, “That snake may be poisonous,” it dove off the wall and into the brush at the base of the wall.  Sometime after the snake we rolled past one of the campsites rest areas.  Aaron and his father had stopped for a break.  I waved and hooted at them.

The rain started to come down.  AK put on his poncho.  I wasn’t cold and knew we were going to get soaked regardless of the jackets.  Then it came down harder.  I tried to persuade AK to stop at a port-o-let for a minute to let it pass, but he wasn’t having that.  It came down in a fury for 5-10 minutes.

During the storm, I became nervous about trees falling on us.  I held AK’s wheel close.  When the storm had finally pushed through, it was still raining some, only more of a sprinkle.  We stopped briefly because AK’s poncho was too hot for him.

We were now riding on mud and crushed gravel with nearly non-stop standing water.  It was a little tricky for our slick tires.  Considering yesterday’s debacle, we erred on the side of caution. 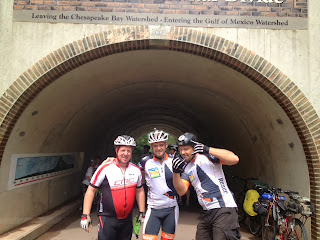 After 25 miles, we reached Pawpaw Tunnel.  The entrance of the tunnel requires you to ride a section of wooden walkways.  They were wet and I took it super slow to the entrance.  There were people inside the tunnel.  I turned on my light, dismounted and headed into the darkness. We passed a family.  One of the children was scared and wanted to leave.  Out of earshot AK mocked them, “Marty I wanna go home!”  I chuckled.


On the other side, the rain picked up again.  Remembering my morning weather check, it was going to keep coming down until early evening.

After about 10 miles of riding we stumbled across Christine and Jeff, good customers where I work and super nice people.  They were on their way to a Pig Roast in Pawpaw.  They had seen some of my pictures on Facebook and knew I was out there.  Jeff joked he was waiting for me to come fix his flat tire.  It was great seeing both of them.  We posed for a picture.  They were clean.  AK and I were a muddy mess!

We stopped Cumberland and thought about our next move.  Considering we pedaled for over 25 miles in varying levels of rain and through a few inches of standing water, we wondered if we could now refer to our speed in knots?  I wished we could!  A “knot” is faster than a standard mile per hour. 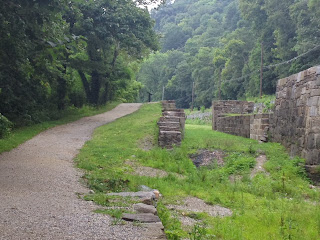 We decided to pack it in and checked into the Marriott in Cumberland.  We figured we'd get a good dinner, a good night’s sleep and punch out the last 140 miles the next day.  As I walked in, the desk clerk said, “You look terrible, do you need a room?”  I smiled, gave her my card and checked in.  She mentioned there was a bike wash around the building and pointed out the breakfast buffet in the morning.


In the time it took to get clean and changed, the storm passed.  It was going to be a nice evening, so we headed back to the pizza place we stopped at two days prior.  It was busy and happy hour. We ordered a lot of food: pizza, wings, fries, celery, salad, beer and coffee.  We relaxed while laughing about the wet ride.

On the way back to the hotel, we ran into the statue of the Boy and Mule.  The Santa-looking gentleman we met a few days ago said it was a mandatory photo op.  I posed with the mule, while I got a shot of AK pretending to choke the boy.