In the middle of the night when no one was looking, he slipped away from his family.  He stuffed his favorite energy food - Poptarts, a hand cannon and sleeping gear into the panniers of his IF 29er and headed off into the wild of Alaska.  Well at least that's how it seemed to me.  Good thing that’s where the similarities end between my friend Rucker and Christopher McCandless.  Rucker took good care to tie up his loose ends, pass out kisses and hugs to those closest to him and promised to stay in contact with his family on his trip into the wild.
There was no big announcement when Rucker left.  I half expected a send off at with a burger and beers at Zipp’s Café.  I’d hear tidbits from friends about some Alaska trip.  Some said Canada.  I sort of wondered why he was doing all the group rides on a full suspension mountain bike weighted down to 35+ pounds with lights and still crushing everyone on road bikes up the climbs.  BioWheels bike shop posted a photo of his newly built rig.  Someone mentioned he was trying to figure out how to carry his new "Alaskan Passport" on the bike.  Well, at least he thought of everything.  Then I got the first email from his wife.  He was gone:
Rucker spent part of the weekend riding the Denali Highway, which according to him is not the sort of highway to which we might be accustomed.
Yesterday he had a burger with Marcello from Italy, saw the biggest porcupine he had ever seen, watched a moose, and last night stayed at Sourdough Campground.
Brief but vivid.  These updates were accompanied by Rucker’s sparse Facebook posts from his rescue beacon, “Everything is okay.  Here are my coordinates.”  Each time I see one, I click through to see where in the world Rucker is.  There is never a message, link or photo.  Just a link to a dot on a map of the Alaskan wilderness and another email:
Rucker just left Wrangell-St. Elias Preserve & Wilderness.   He (spent) his time yesterday on an old mining road in Wrangell-St.Elias.  Had some of the most beautiful views so far, and (traveled) some of the gnarliest roads.  Parts of the road were crossed by creeks up to his panniers.
For the past three days, his mileage has been:
Monday: 150
Sunday: 110
Saturday: 102
…all on mostly dirt roads. 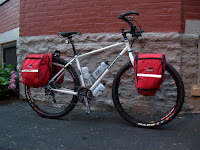 Well he’s certainly making the most of his school teacher summer and the fitness gleaned from the Mohican 100.  I can’t believe the distance he’s covered from Anchorage.  He’s halfway to Prudhoe Bay by now.  A few days went by and I got another email:
Yesterday, Rucker was passed by two Google Earth cars on highway 1, heading North, between miles 14 and 15.  If they update instantly, there is a good chance he is on Google Earth there.  If anyone can find a picture, I'd love to see it.
Of course I clicked on Google Earth.  Of course I didn’t see anything.  Maybe a polar bear got him.  Another few days passed.  “Everything is okay.  Here are my coordinates.”  It appears he’s picking his way through the Alaskan valleys.  Then another pictureless email:

Rucker made it to Canada yesterday but was turned away at the border on account of his hand cannon (Alaskan Passport.)  So no Inuvik, and probably no polar bears.  He spent his last night in Eagle and will be heading to Deadhorse.
He said the roads are rough and they must be - his original tires are history and he is working his way through his spares.
According to the last Facebook post yesterday, Rucker was in Coldfoot Alaska on the Dalton Highway, home of Ice Road Truckers, apparently waiting a shipment of some fresh 29er tires.

I think I bumped into him last week while biking the Dalton a little south of Coldfoot. I was headed in the other direction and only talked to him for a couple of minutes but he seemed to be having a good time and was zooming along.

Thanks for the photo Spruceboy! Much appreciated. He looks a tish thinner and tanner than when he left. I hope you fed him a pop-tart!

Captain Something or Other said...

That is amazing, I would love to do something like that.