When Harry Met the Throttle Blaster 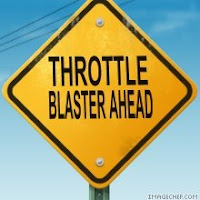 We have a saying when we go for rides in Kentucky. Usually my buddy Tony shouts out, “You know what’s wrong with this ride?!” The response is always a resounding, “Not a G-D thing!” Aside from the errant dog (our other saying is that it’s not a ride in Kentucky, till you get chased by a dog…and sometimes a 3-legger that can chase like he’s got six legs) and pickup truck with three polite young men who shout words of encouragement out the window, rides in Northern Kentucky are some of my all time favorites.

As profiling as it may seem, usually a ride down route 10 in Kentucky goes like this: pickup truck full of nice young men shouting positive messages out the window, dog, tobacco, “man this road just flows on forever,” tobacco, dog, “ooh look at the pretty view from the top of this ridge,” Baptist Church, bar, “ooh you can see the Ohio River from up here.” Also, it’s a very rare day to see a local riding a $3000+ bike instead of being inside a $300 pickup truck 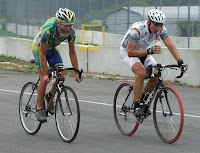 . There are two that I know personally, one of whom is Harry Wicks (pictured left in photo). He’s Appalachian born and bred. Unfortunately, he didn’t have a good ride in Northern Kentucky this past Saturday, so bad he didn’t come to a party at my house because he thought the black cloud hanging over his head would fall on my house. Thanks for looking out for me Harry!

In his own words (with some of mine tossed in like this), this is the story of Harry’s bad day. It helps if you read the story with an Eastern Kentucky drawl.

I suppose (fancy Ohio talk for “I reckon”) we all have days where things just don't go as planned, but Saturday, it seemed as if the gremlins were after me. Saturday, being a beautiful fall day and perfect riding weather, I thought that I would ride one of my "easier" routes so not to be dead for the race Sunday. (Easier in Harry’s neighborhood simply means the hilly route with only one mean foaming at the mouth chasing dog)

Things started off badly as I crashed on a corner within sight of my house that I have ridden thousands of times. I guess that I hit a rock and didn't have my brain tuned on yet. Anyway, the slide was for about 20 feet down hill on the blacktop and into the neighbor’s yard. (I told ya. You can’t make stuff like this up. Howdy neighbor!) I went back home and doctored on the road rash and set out again. Pain and bleeding are not going to ruin my day. (Okay if that doesn’t prove he’s a tough-ass Appalachian, I don’t know what will)

The following things happened to me over a 2 1/2 hour ride:

Almost was ran into head on by someone rounding a curve in a car, on the wrong side of the road. (Note to non-locals: sometimes they do drive on the left side of the road in the hills of Kentucky)

Almost ran over by someone on a motorcycle passing me in a corner to hot. I could have elbowed him in the face. It was that close. (For those that are into it, the hills of Northern Kentucky are a killer place to ride your Kawasaki Ninja 3000x Supa Bike)

Some redneck in a diesel truck drove next to me, slowed down and romped on the throttle- blasting me with diesel exhaust. (This may sound bizarre to some of you, but this throttle-blasting has happened to me on occasion, like a redneck farting in your face)

Then my pump fell apart. (And, this is where I feel he should’ve went home and counted his blessings) I had to reassemble it on the side of the road.

Was chased by 3 dogs. (Remember, this was supposed to be the easy ride)

A lady going to her mailbox and looking directly at me, walked into the road right in front of me. I managed to whop (combination of whip and whoop) around her while out-sprinting her dog chasing me. (That would make dog #4 I believe, the quota for a weeks worth of rides in Kentucky in just one day)

A car passed around me as I was climbing up a blind hill and almost went head on into an oncoming car. I figured that I was to be the expendable "thing" in the way during a quick lane change, but everyone was safe and I continued on watching for the next misfortune.

By this time I was beginning to watch the sky for meteors heading my way.

I did servive. (That is precisely how you write the word "survive" with a southern drawl, and one of the reason's Harry is so endearing) Tomorrow will be a better day. See y'all at the race.